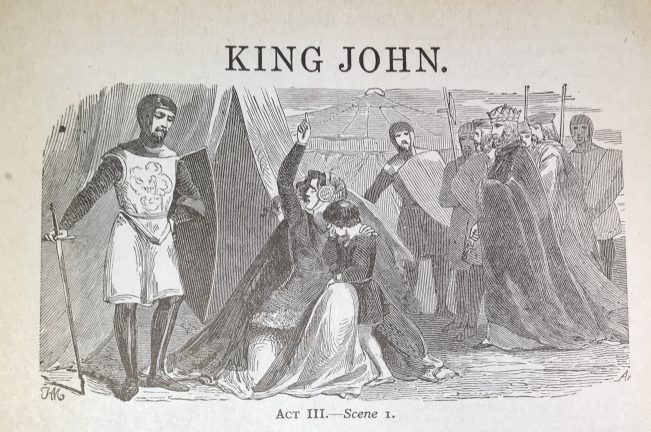 On 19 October 1216 John, King of England, died, possibly of dysentery. Harsh though it may sound, dying was probably the best thing he could have done for his dynasty and his kingdom, for by the end of his reign much of the realm was in open rebellion, supported by invading foreign armies.

The fortunes of the Plantagenet dynasty revived almost instantly with his death, as Lord Protector William Marshal crushed the rebels and invading French the following year.

John took the throne in 1199 when his older brother Richard the Lionheart was killed fighting in France, and – despite the efforts of revisionist historians to prove the contrary – had proved to be a disastrous King.

He had lost Normandy, the land of his ancestor William the Conqueror, to the French in 1204, and in the later years of his reign the Barons had been in open revolt.

In 1215 John was forced to sign the famous Magna Carta giving up some power to these Lords, and a year later the situation was even worse for him.

John’s refusal to accept the authority and legitimacy of the document lead to full-scale war with the Barons, who were supported and encouraged by the ambitious Prince Louis of France, who had eyes on the English throne.

The war with Louis

In May 1216 Louis landed in England, forcing John to flee to Winchester. Unopposed, Louis marched into London and was proclaimed King of England by the rebellious barons.

John still had some support and garrisons at Dover and Windsor resisted invading forces nobly. His own forces took the Rebel castle of Rochester after a long siege, and he spent the summer of 1216 shoring up the defences of the east of England.

However, his incompetence still shone through, and many loyalist barons defected to the rebels – including John’s half-brother.

The east of England also fell to the rebels in great swathes despite John’s best efforts. while Scottish forces invaded the north and the French firmly held much of the south.

To the King’s credit, he did not despair despite the dire situation and marched north to relieve sieges of Lincoln and Windsor before returning to King’s Lynn to resupply.

There, however, he contracted dysentery, and as he headed back north he grew steadily more ill. In the early hours of the 19th October he died, aged just 49. Contemporaries speculated that he may have been killed by poisoned ale or even a “surfeit of peaches.”

We will never know whether it was comfort eating, poison or illness that killed John, but his death marked a major turning point in the fortunes of his dynasty.

The saving of England

The throne passed automatically (despite a better claim from John’s niece Eleanor of Brittany) to John’s nine-year old son Henry. This sounds like a bad thing to happen in the middle of a war, but Henry was in good hands.

William Marshal, a loyal and extremely gifted Baron, was named Lord Protector, and his military genius and deft diplomatic touch would prove to be crucial.

Furthermore, with such a young child on the throne, the barons now saw the rampaging Louis as the greater threat to their freedom.

With encouragement from the respected Marshal, they began to switch sides. Thus the civil war became more straight-forward, as the English sought to cleanse their land of invaders.

In 1217 the fortunes of the Plantagenet dynasty suddenly changed. Marshal’s forces defeated barons loyal to Louis at the Second Battle of Lincoln, and the Frenchman was forced to return to France to resupply.

On his way back Marshal’s ally and friend Hugh de Burgh attacked his fleet and crushingly defeated it at two battles off the coast of Kent — and when a fleet of French reinforcements was also destroyed Louis was forced to admit defeat.

The war was over. Thus we should remember the day of John’s death, 800 years ago today, as the day on which England was saved.