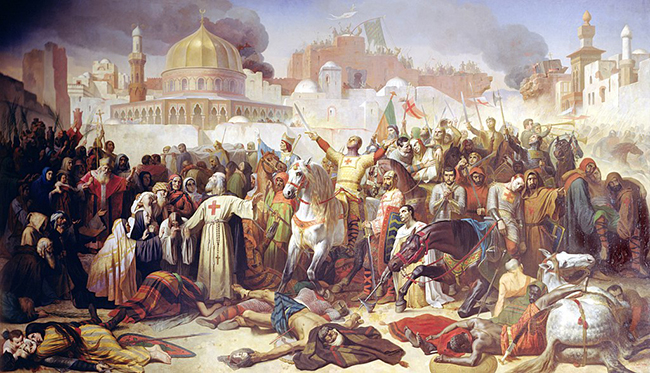 On 27 November 1095, Pope Urban II stood up at a council of clergy and nobility at Clermont and urged Christians to embark on a military campaign reclaim Jerusalem from Muslim rule. This call was met by an incredible surge of religious fervour, as tens of thousands of Christians from across Western Europe marched east, in what was an unprecedented expedition: the First Crusade.

After a series of unlikely victories against the Seljuk Turks in Anatolia and Syria, Frankish knight Godfrey of Bouillon scaled the walls of Jerusalem in 1099, and the crusaders entered the holy city, massacring the inhabitants they found inside. Against all the odds, the First Crusade was a success.

But who were these crusaders and why did they suddenly attempt to take the Holy Land, four centuries after Muslim rule was established in the region.

Why did Pope Urban call the First Crusade?

The backdrop to the call for a crusade was the Seljuk invasion of the Byzantine Empire. The Turk horsemen had descended into Anatolia in 1068 and crushed Byzantine resistance at the Battle of Manzikert, depriving the Byzantines of all their lands east of Constantinople.

Byzantine Emperor Alexios I Comnenos wrote to Pope Urban in February 1095, requesting aid in halting the Turk advance. However, Urban mentioned none of this in his address at Clermont, as he saw the emperor’s request as an opportunity to bolster the position of the papacy.

Western Europe was plagued by violence, and the papacy was struggling to assert itself against the Holy Roman Empire. Pope Urban saw a crusade as the solution to both these problems: diverting military aggression against an enemy of Christendom, in an expedition led by the papacy. The crusade would elevate papal authority and win back the Holy Land for the Christians.

The Pope offered everyone who went on crusade the ultimate spiritual incentive: an indulgence – the forgiveness of sins and a new route for attaining salvation.

Jerusalem – the centre of the universe

Jerusalem was the obvious focal point for the First Crusade; it represented the centre of the universe for medieval Christians. It was the holiest place in the world and pilgrimage there flourished in the century before the crusade.

The crucial importance of Jerusalem can be understood by looking at medieval maps of the world, which place the Holy Land at the centre.

The Holy Land had been conquered by Caliph Omar in 638 AD, as part of the first wave of Islamic expansion after the death of Mohammed. From then on, Jerusalem had been passed between various Islamic empires, and at the time of the Crusade was being fought over by the Fatamid Caliphate and the Seljuk Empire.

Who were the Crusaders?

There were actually two Crusades during the late 1090s. The “People’s Crusade” was a popular movement led by Peter the Hermit, a charismatic preacher who whipped crowds of believers into a religious frenzy as he passed through Western Europe recruiting for the crusade.

Lacking military organisation and propelled by religious enthusiasm, thousands of peasants crossed the Bosphorus, out of the Byzantine Empire and into Seljuk territory in early 1096. Almost immediately they were ambushed and annihilated by the Turks.

The second expedition was a far more organised affair. Leadership for the crusade was assumed by various princes from France and Sicily, such as Bohemond of Taranto, Godfrey of Bouillon and Raymond of Toulouse. Adhemar, bishop of Le-Puy in France, acted as representative for the Pope and spiritual leader of the Crusade.

The army they led into the Holy Land was made up of household knights, bound by feudal obligations to their lords, and a whole host of peasants, many of whom had never fought before but who burned with religious zeal.

During the course of the campaign, Byzantine generals and Genoese merchants would also play a crucial role in capturing the Holy City.

What did they accomplish?

The First Crusade was an extraordinary success. By 1099, the Seljuk grip on Anatolia was dealt a blow; Antioch, Edessa and, most importantly, Jerusalem was in Christian hands; the Kingdom of Jerusalem was established, which would last until the Fall of Acre in 1291; and a precedent for a religious war in the Holy Land had been established.

There would be eight more major Crusades in the Holy Land, as generation after generation of European nobility sought glory and salvation fighting for the Kingdom of Jerusalem. None would be as successful as the first.