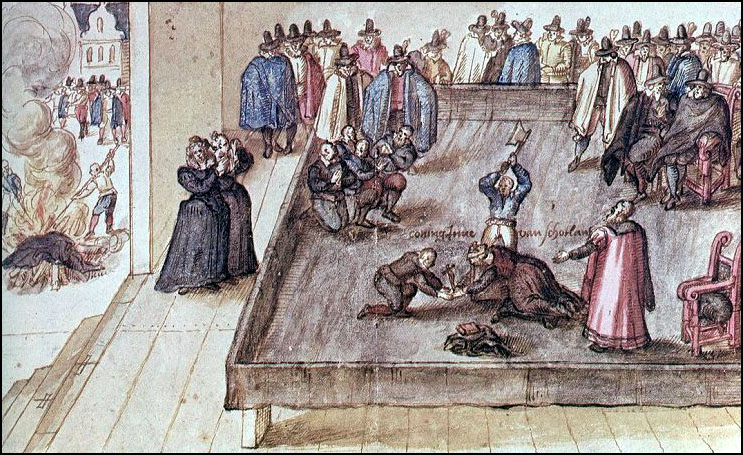 The Tudor era is one of England’s most infamous times of religious political and social upheaval, as various monarchs attempted to impose their own beliefs and ideas onto the nation.

Of all those rulers, Elizabeth I’s rule was the most successful and stable, but she still had her fair share of rivals of a very personal nature to remove. On 8 February she took drastic action against two separate plotters at two different stages of her reign, ensuring that her vision for England would survive.

The first centered around her cousin, the beautiful and tragically glamorous Mary Queen of Scots. Elizabeth had always been uncomfortably aware that if she died – being childless – the Catholic Mary would be next in line for the throne.

After the reign of terror of Elizabeth’s Catholic sister (another Mary) and the intrigues of the Spanish, this threatened to undo all of Elizabeth’s work in creating religious harmony if the Queen of Scots lived longer than her.

As a result, when Mary was displaced by rebellious nobles and fled south to England, she was imprisoned rather than hospitably received by her cousin.

Unsurprisingly, this treatment and her strong and public faith made her a rallying point for various plots against Elizabeth during her 19-year imprisonment.

The most serious were the Ridolfi plot of 1571 – which threatened to replace the Queen with Mary with the help of Spanish troops, and the Throckmorton Plot of 1583, another plan to murder and replace Elizabeth.

By the mid 1580s it was clear that as long as Mary lived Catholics and Spanish-sympathisers would flock to her, and after her agent Thomas Morgan was implicated in yet another assassination attempt in 1585, Elizabeth decided that enough was enough.

Though Mary’s level of complicity in these plots is still unclear, Mary was arrested while out riding in August 1586. Six months later, on the 7 February, she was informed that she was to be executed the next morning.

She met her death with exemplary courage and publically forgave her executioners before being beheaded with three messy blows of an axe. Elizabeth then claimed that she had not authorised this, washing her hands of the death of her kinswoman.

The second plot was felt as an even stronger betrayal by Elizabeth. She is now famous for her fondness of handsome and powerful noblemen and adventurers who became her “favourites,” and foremost among these was the charming Robert Devereux, Earl of Essex, who flirted his way to prominence in the last years of the 16th century.

In the 1590s, however, some strain entered their relationship as the arrogant and headstrong Earl disobeyed orders and failed to treat the Queen with enough deference.

At one point she cuffed him round the head for his insolence at a meeting of the Privy Council, and he half drew his sword on her in anger.

Things came to a head when he was made Lord Lieutenant of Ireland – then an English possession – in 1599. Essex was given huge resources to crush a revolt lead by the Earl of Tyrone, but squandered them in a poor campaign that lead to a humiliating truce in 1600.

Stung by criticism from home, he directly disobeyed the Queen’s orders by returning to England that year. Despite her fondness for Essex Elizabeth was not a woman to let such insolence stand after almost fifty years of rule, and placed him under house arrest in June.

Outraged and now penniless, Essex began to plot against her once he was allowed more freedom in November. His supporters began to put on the controversial anti-monarchical Shakespeare play Richard II in the Globe theatre, while Essex took hostage the four men that the Queen sent to inquire about his actions.

Believing them to be safely imprisoned, he then marched on London with a large group of supporters.  Luckily for the Queen her famous spymaster Robert Cecil caught wind of the plot, and ordered the mayor to close his gates to the rebels.

With access to the support of the capital denied to him, most of Essex’s supporters deserted him and the hostages got away, meaning that he had little choice but to slink back to his base at Essex House and await a siege.

That evening, 8 February 1601, the Earl surrendered lamely to the besiegers and was executed two weeks later.

The Queen is said to have been badly shaken by her favourite’s betrayal for the remaining two years of her life, but the England that she had built survived partly thanks to her ruthlessness, and was passed onto her successor, who was – ironically – the son of Mary Queen of Scots.