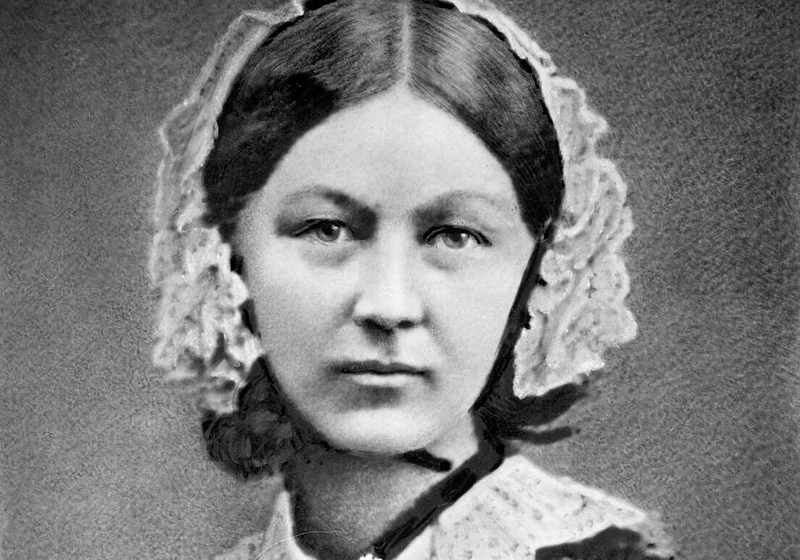 Best known as ‘The Lady with the Lamp’, Florence Nightingale was one of Victorian Britain’s most celebrated individuals. Her pioneering use of statistics, unwavering principles and determination to challenge traditional female roles enabled a transformation of attitudes to nursing and hospitals.

Nightingale was born in 1820 and named after the city of her birth. She enjoyed a privileged upper-middle class upbringing with her sister, Parthenope. Their father, William Edward Nightingale, was a wealthy landowner who moved in the highest circles of English society.

The sisters were home educated by their father, who taught them classics, philosophy and modern languages.

From a young age, Florence demonstrated a love of maths and sciences. She loved meticulous organisation of information, and documented her shell collection with tables and charts. Her sister, Parthenope, recognised her sister’s habits:

‘She has taken to mathematics… she is deep in them and working very hard.’

In 1837, the Nightingale family toured Europe, hoping to equip the girls with a toolkit of arts and cultural knowledge, and increase their chances of finding an eligible husband. Much to her parents’ annoyance, Florence took time to record detailed notes of population statistics, charitable institutions and hospitals.

A woman of principle

Increasingly, Florence believed she had a calling from God to help others in some form or another. She wrote:

‘God spoke to me and called me to His Service. What form this service was to take the voice did not say.’

This unconventional path shocked her family. As a wealthy, intelligent and beautiful young woman, Florence could have expected to marry well. When she proposed training as a nurse in Salisbury, her parents flatly refused to support a vocation suited for servants and working classes.

Her faith in this ‘calling’ obstructed any romantic engagement. Although she enjoyed a 9 year courtship with Richard Monchton Milnes, she refused his hand in marriage, believing it would frustrate her work in nursing.

Her independence of thought was reflected by her referral to herself in the masculine – she described herself as ‘a man of action’ and ‘a man of business’. Her mother acknowledged this independence in 1838:

‘I do not expect that love passages will be frequent in her life.’

After years of trying to obstruct their daughters’ wishes to become a nurse, Florence’s parents relented and allowed her to train in Germany. In 1853, she became a superintendent at the Institute for the Care of Sick Gentlewomen in Upper Harley Street, London.

In 1854, Britain entered the Crimean War. Newspapers were awash with horrific reports of the appalling conditions in army hospitals. The Secretary of State at War, Sidney Herbert, was a close friend of Nightingale. They had met several years previously, when Herbert was on his honeymoon in Rome.

Herbert appointed Nightingale to take 38 nurses to the military hospital in Scutari. It was the first time a woman had officially served in the army.

When she arrived in Scutari, it was clear that the newspaper horror stories were true.

The hospital, based in the old Turkish Selimiye Barracks, was coated in 1 inch of faeces, medicines were in short supply, and their was no equipment to process food for the patients.

Far more men died of cholera, dysentery, typhoid and malaria than battle wounds. Nightingale and her nurses set out to clean the hospital, but the death rates refused to drop.

She sent a plea to The Times for a government solution, the British Government sent out a Sanitary Commission, which revealed that the Barrack Hospital was built on a sewer which contaminated the water.

The government commissioned Isambard Kingdom Brunel to design a prefabricated solution. The Renkioi hospital was the pioneering result.

The lady with the lamp

During the Crimean war, Nightingale became a household name, after a portrait of her tending to patients was published in The Times. Her family were bombarded with fanmail, and images of the ‘lady with the lamp’ were printed on bags, mats and souvenirs. She was described by The Times:

‘She is a ‘ministering angel’ without any exaggeration in these hospitals, and as her slender form glides quietly along each corridor, every poor fellow’s face softens with gratitude at the sight of her.

When all the medical officers have retired for the night and silence and darkness have settled down upon those miles of prostrate sick, she may be observed alone, with a little lamp in her hand, making her solitary rounds.’

Although she often travelled under the pseudonym, Miss Smith, Nightingale began to use her position of influence to further nursing interests.

With the support of Queen Victoria, she persuaded the government to set up a Royal Commission to explore the health of the army. They uncovered some shocking statistics – that 16,000 out of 18,000 deaths were due to diseases, not battle wounds.

In 1857, Nightingale sought to demonstrate the effects of the Sanitary Commission through a diagram. This visual presentation is taken for granted now, but it was a relatively novel way of presenting data – the pie chart had first been developed by William Playfair in 1801.

The Rose diagram was widely republished, and brought the issue to the forefront of public attention. Nightingale described its effect on the British public,

‘It should affect through the eyes what we fail to convey to the brains of the public through their word-proof ears.’

In this period, nurses were considered a joke figure. Dickens caricatured the standards of care through his character Sarah Gamp, who was incompetent, negligent, alcoholic and corrupt. Caroline Worthington, director of the Florence Nightingale Museum, summarises how Nightingale changed this:

‘When she started out there was no such thing as nursing. The Dickens character Sarah Gamp, who was more interested in drinking gin than looking after her patients, was only a mild exaggeration. Hospitals were places of last resort where the floors were laid with straw to soak up the blood.

Florence transformed nursing when she got back [from Crimea]. She had access to people in high places and she used it to get things done. Florence was stubborn, opinionated and forthright but she had to be those things in order to achieve all that she did.’

In 1859, Nightingale published ‘Notes on Nursing’ and ‘Notes on Hospitals’, and a nursing school was founded in her name. In these decades, she campaigned to make nursing a respectable career path, and improved the standards of hospitals, which became more clean, spacious and ventilated.

In a world where medical treatment was a luxury for the wealthy, Nightingale sought to improve the standards of treatment for the poor and vulnerable. In ‘Notes on Nursing’, advice was given on how to care for sick neighbours and relatives. It sold well to the general public, providing advice such as:

‘Every nurse ought to be careful to wash her hands very frequently during the day. If her face, too, so much the better.’

In her final decades, Nightingale suffered from a particularly extreme form of brucellosis, although this didn’t prevent her productivity. After being the first woman to be awarded the Order of Merit, she died in 1910, aged 90.

The offer of burial in Westminster Abbey was declined by her relatives and she is buried in Hampshire.