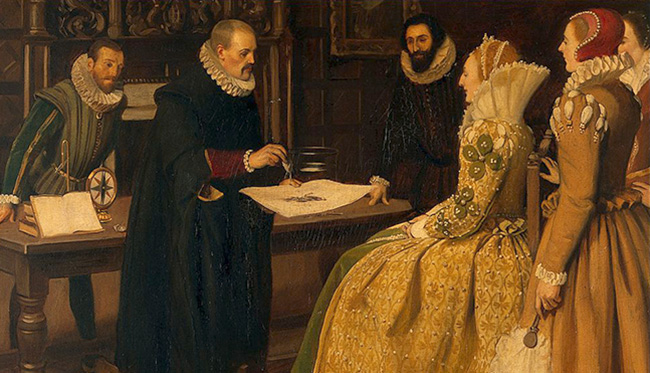 It was called the Golden Age – a time when England grew in wealth, status and culture. Led by Elizabeth I, the Virgin Queen, England was shaped to become an enormously influential and powerful country.

During the Elizabethan Era, the nation is considered to have been more prosperous than most of the nations in Europe, with only Spain being a true rival.

But what did England actually achieve under her rule? Here are some key developments that occurred from 1558 to 1603:

When Elizabeth I took over the throne of England, she inherited a virtually bankrupt state. So she introduced frugal policies to restore fiscal responsibilities.

She cleared the regime of debt by 1574, and 10 years on the Crown enjoyed a surplus of £300,000. Her policies were boosted by trans-Atlantic trade, persistent theft of Spanish treasure and the African slave trade.

The merchant Thomas Gresham founded the Royal Exchange to act as a centre of commerce for the City of London during Elizabeth’s era (she gave it the royal seal). It proved to be hugely important in the economic development of England.

Elizabeth I is the ninth longest reigning British monarch. Among females, her reign is the third longest after Elizabeth II and Queen Victoria.

It was in sharp contrast to the previous and following periods, which were marred by religious battles between Protestants and Catholics and political battles between parliament and the monarchy respectively.

3. Victory over the Armada

Philip II of Spain, who had been married to Elizabeth’s sister Mary I, was the most powerful Roman Catholic king.

In 1588, the Spanish Armada set sail from Spain with the purpose of assisting an invasion of England to overthrow Elizabeth. On 29 July the English fleet badly damaged the ‘Invincible Armada’ in the Battle of Gravelines.

5 Spanish ships were lost and many were badly damaged. Worse soon followed when a strong south-westerly wind forced the Armada into the North Sea and the fleet was unable to transport the invasion force – gathered by the Governor of the Spanish Netherlands – across the Channel.

The famous speech delivered by Queen Elizabeth to her troops, who were assembled at Tilbury Camp, was hugely influential:

‘I know I have the body but of a weak and feeble woman; but I have the heart and stomach of a king, and of a king of England too.’

The successful defence of the Kingdom against invasion on such an unprecedented scale boosted the prestige of England’s Queen Elizabeth I and encouraged a sense of English pride and nationalism.

Elizabeth’s father Henry VIII and sister Mary I had seen England torn between Protestantism and Catholicism, causing deep divides and persecution in the name of religion. Queen Elizabeth I wanted to build a stable, peaceful nation with a strong government, free from the influence of foreign powers in matters of the church and the state.

Later in her reign she exclaimed,

“There is only one Christ, Jesus, one faith, all else is a dispute over trifles.”

She also declared that she had “no desire to make windows into men’s souls”.

Her government only adopted a hard line against Catholics when Catholic extremists threatened this peace. In 1570 the Pope issued a Papal Bull of Excommunication against Elizabeth and actively encouraged plots against her.

The 1570s and 1580s were dangerous decades for Elizabeth; she faced four big Catholic plots against her. All had the aim of getting the Catholic Mary, Queen of Scots on the throne and returning England to Catholic rule.

This did result in harsher measures against Catholics, but comparative harmony was achieved throughout her reign.

Advancements in the practical skills of navigation enabled explorers to thrive during the Elizabethan era, which also opened up profitable global trade routes.

Sir Francis Drake, for example, was the first Englishman to circumnavigate the globe. He was also authorised by Elizabeth to raid Spanish treasure ships in the New World. In 1583 Humphrey Gilbert, a member of parliament and explorer, claimed Newfoundland for Queen Elizabeth I and in August 1585 Sir Walter Raleigh arranged for the first (albeit short-lived) English colony in America at Roanoke.

Without these astonishing feats of exploration, the British Empire would not have expanded as it did in the 17th century.

Drama, poetry and art blossomed under Elizabeth’s reign. Playwrights like Christopher Marlowe and Shakespeare, poets like Edmund Spenser and men of science like Francis Bacon all found an expression for their genius, often thanks to the patronage of members of Elizabeth’s court. Elizabeth herself was also a major patron of the arts from the outset of her reign.

Theatre companies were invited to perform at her palaces, which helped their reputations; previously, playhouses had often been castigated or closed down for being ‘immoral’, but the Privy Council prevented the Mayor of London closing the theatres in 1580 by citing Elizabeth’s personal fondness for theatre.

Not only did she support the arts, Elizabeth also often featured. Spenser’s Faerie Queene, for example, contains multiple references to Elizabeth, who appears allegorically as several characters.

It was no easy matter to become queen. Elizabeth was the daughter of Anne Boleyn, Henry VIII’s second wife, and she faced challenges from a very young age.

After Anne’s execution there were several attempts to have Elizabeth removed from the line of succession, although these proved unsuccessful.

The short reign of Edward VI was followed by the brutal ruler-ship of her sister, Mary. Mary’s accession was a problem. She was a devout Catholic and began rolling back the reforms of Henry’s time, burning at the stake several notable Protestants who did not renounce their faith. As the leading protestant claimant, Elizabeth quickly became the focal point of several rebellions.

Sensing the threat Mary imprisoned Elizabeth in the Tower of London. It was perhaps only Mary’s death which spared Elizabeth her life.