We’ve put together an experts guide to Argentine Cultural Places, Landmarks and Monuments, with our top ten places to visit as well as a full list of Historic Sites in Argentina, which shouldn’t be ignored if you have the time.

What are the best Historic Sites in Argentina?

San Ignacio Mini in Argentina is a UNESCO World Heritage site. Originally founded in approximately 1611, it formed part of a series of Jesuit Missions of the Guaranis established by the Society of Jesus or ‘Jesuits’. Many similar Jesuit missions were scattered across Argentina, Brazil and Paraguay.

A thriving settlement in the early 18th century, in 1767 the Jesuits were forced out after a campaign to suppress the Society of Jesus initiated by Pope Clement XIV. The mission itself was destroyed a year later.

Today, the ruins are some of the most well-preserved of the Jesuit Missions in South America and a popular tourist destination. They include a magnificent entrance, a church, a cemetery, a school, a large central square and approximately thirty houses of its original residents as well as several other original buildings.

La Recoleta Cemetery (Cementerio de la Recoleta) is a world renowned cemetery in Argentina’s capital, Buenos Aires. Opulent and grand, La Recoleta Cemetery is characterized by a range of ornately decorated mausoleums, many of which are made of marble and adorned with statues. In fact, this over ground burial system is due to the fact that is anything buried underneath La Recoleta Cemetery’s marshy earth is likely to rise back to the surface.

La Recoleta Cemetery sees presidents and wealthy businessmen rub shoulders with poets, writers and boxers. Look out for presidents such as Raul Alfonsin, Arturo Umberto Illia, Hipólito Yrigoyen and Nicolás Avellaneda, one of Napoleon’s grandchildren Isabel Walewski Colonna and the boxer, Luis Ángel Firpo. It’s most famous resident is Eva Perón or “Evita”, who is buried in a black marble mausoleum owned by her family and listed under her maiden name “Maria Eva Duarte”.

Inside La Recoleta Cemetery visitors can see a variety of graves, some better maintained than others, but altogether offering a fascinating tour through Argentinean history. English tours are available Tuesdays and Thursdays at 11am.

Plaza de Mayo is famous and politically significant square in Argentina’s capital, Buenos Aires. Established in 1580 and once known as Plaza de la Victoria, it was renamed as Plaza de Mayo in the nineteenth century following the May Revolution.

Today the square is an important focal point for political life in Argentina and is where most of its political institutions are housed, including the Casa Rosada from which Eva Peron or “Evita” addressed the people and city hall. It also contains the May Pyramid, a statue commemorating the May Revolution and Argentina’s independence from Spain, as well as The Metropolitan Cathedral of Buenos Aires.

Nuestra Senora de Loreto was an important Argentinean Jesuit mission founded in 1610. Unlike many of its counterparts which had to move several times due to ongoing attacks from slave traders, the mission only moved once, in 1631.

While some vegetation has been cleared from the ruins, which include the church, the site is not as well preserved as nearby San Ignacio Mini. 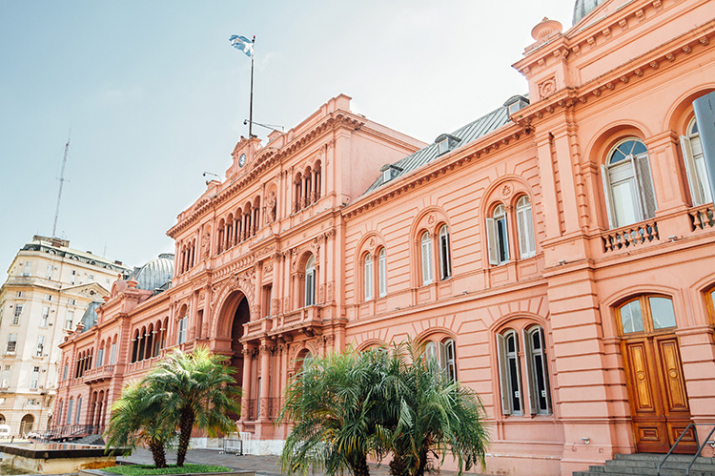 Casa Rosada is a presidential palace in Argentina’s capital Buenos Aires. Literally translated as the “Pink Palace” due to its distinctive pink façade, Casa Rosada houses the executive branch of Argentina’s government.

The area on which Casa Rosada is located was once by the sea and in the late sixteenth century was the site of the Royal Fort of San Juan Baltasar de Austria built under the orders of Don Juan de Garay. The building was renovated and decorated in the 1860, first by Bartolomé Mitre and then by Domingo Sarmiento, transforming it into a presidential residence.

Probably the most famous aspect of the palace is its association with Eva Peron or “Evita”, the wife of President Juan Peron who addressed the people from its balcony.

Today, the palace is open to the public, and has a museum in its lower levels containing numerous artifacts relating to Argentina’s history and its government.

The Buenos Aires Catedral Metropolitana (Metropolitan Cathedral) was originally built in the sixteenth century, although it has since undergone several changes and the current building was constructed in 1745.

The long and varied history of the Catedral Metropolitana can be seen through its diverse architecture, ranging from its neoclassical façade designed by French architects Prosper Catelin and Pierre Benoit to its 18th century nave, dome and altars.

As the main church of the Archdiocese of Buenos Aires, Catedral Metropolitana forms the centre of catholic life in the city. Catedral Metropolitana contains the mausoleum of General San Martin, a central figure in Argentina’s struggle for independence from Spain. It also houses the tomb of the unknown soldier of Argentine independence and an eternal flame of remembrance.

The Museo de la Mujer, or Women’s Museum, is a museum in central Buenos Aires, Argentina. Its historical and artistic exhibitions deal with themes of women’s culture and history, primarily in Argentina and other Latin American countries.

The museum, described by its directors as “a proposal of art and culture from women who make history”, examines the changing role of women throughout history and scrutinises the challenges which are faced by women across the world today. Through their work, the museum’s organisers aim to achieve the recognition of the rights and interests of women, and to fight against gender-based discrimination and oppression.

The exhibitions coordinated by the museum, which are often photographic in nature, have focussed on subjects such as changing perceptions of female sexuality, female entry into and participation in the labour market, and women’s historic struggle to escape from their traditional role as homebound mothers and housewives devoted to so-called ‘women’s work’.

The Museo de la Mujer is also a centre for discussion and exchange of knowledge, expertise and opinion. It organises regular classes and workshops dealing with themes like theatre and acting, working with historical sources and textile design.

The museum’s directors and researchers have published numerous articles, leaflets and books. In 2002, one of the museum’s coordinators, Berta Wexler, made a hugely significant contribution to existing knowledge about women’s role in the Latin American Wars of Independence. She published a meticulous investigation into the guerrilla military leader Juana Azurduy de Padilla, an important protagonist of the struggle to liberate the territories of the viceroyalty of Río de la Plata (an area which covered present-day Argentina, Bolivia, Uruguay and Paraguay).

Azurduy, who was from Alto Peru (present-day Bolivia), is one of the few women who have been recognised for the role they played in the Wars of Independence. The airport of Sucre in Bolivia is named after her.

Throughout August and September 2012, the Museo de la Mujer will be organising a number of events which deal with the experiences of women during the Independence and post-Independence eras in South America.

Basilica de Nuestra Senora Del Pilar was constructed in 1732 in a colonial style including a square tower and a dome.

Its interior includes a central nave opening up to two chapels. It sits across from the Recoleta Cemetery.

The Welsh Regional Historical Museum in the town of Y Gaiman, Patagonia, tells the story of the Welsh settlement of this region in the 19th century.

Gaiman itself is a small town in the valley of Chubut which was colonised by Welsh settlers – even today Welsh and Spanish are the two local languages. Welsh was forcefully discouraged during the Peron years and after, but is now making a resurgence. The town forms a key part of the Welsh settlement of Patagonia, also known as Y Wladfa Gymreig.

The Welsh Regional Historical Museum can be found in the former station house and contains many lovingly maintained relics of the settlement period including “Y ty Cyntaf” or “The First House”. It tells the story of these first settlers and explores the history of the Welsh community in the region.

Other sites to be found in Gaiman include the school, which proudly displays a desk presented by Lloyd George on an official visit, while the graveyard is a wonderful source of stories and histories.

Groups from the nearby town of Trelew, Gaiman and the Welsh settlements in the Andes are often to be met at the National Eisteddfod in Wales, and Trelew stages the huge annual Eisteddfod festival where Welsh traditional tunes are sometimes sung to South American rhythms. A great experience.

10 of the Best Historic Sites in Australia