It is little wonder that there’s such an interesting selection of Historic Sites in Croatia. After all, inhabited since prehistoric times, Croatia has the marks of several civilisations, including the Greeks and Romans, and has a fascinating pre- and post-war history.

There’s a host of top cultural places in Croatia to visit and among the very best are Dubrovnik, Pula Arena and Fort Lovrijenac. Other popular sites tend to include Dubrovnik’s Franciscan Monastery, Dubrovnik Cathedral and Dubrovnik Synagogue.

We’ve put together an experts guide to Croatian cultural places and landmarks, with our top ten places to visit as well as a full list of Historic Sites in Croatia, which shouldn’t be ignored if you have the time.

What are the best Historic Sites in Croatia? 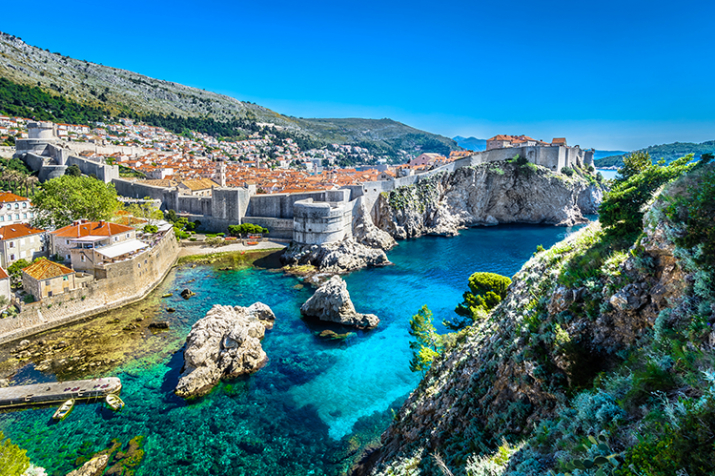 Dubrovnik is a Croatian city on the Dalmatian coast understandably known as the 'Pearl of the Adriatic'.

While many historical sources date its establishment to the seventh or even fifth century, Dubrovnik or its ‘old city’, which is protected as a UNESCO World Heritage site, became a powerful merchant town in the thirteenth century and, in a period before the eighteenth century, operated as a free state.

Dubrovnik is considered to be the cultural centre of Croatia and, despite the fact that the city suffered a devastating earthquake in 1667 and several attacks including being invaded by the Nazis and a seven month siege by the Yugoslav People’s Army in 1991, many of its stunning buildings survive.

Amongst its many draws are its churches, such as the beautiful Cathedral of the Assumption of Mary with its impressive organ, the Church of St. Ignatius, the church of St Blasius (patron saint of Dubrovnik) and the Franciscan Monastery which houses the third oldest pharmacy in the world. Many of Dubrovnik’s churches are built in a classic Baroque style.

Dubrovnik’s main street is Stradun, where the Large Onofrio Fountain can be found and, in nearby Luza Square, one can see Dubrovnik’s symbol of peace, Orlando’s Column. Also within the vicinity of the buzzing Luza Square are the fifteenth century buildings of Sponza Palace and Ducal Palace, both of which have served important secular roles in Dubrovnik’s history.

Other gems include the Zelenci statues, or at least the new replicas of the originals, at the top of the Bell Tower near the Polce entrance to Dubrovnik, which toll a giant bell on the hour. 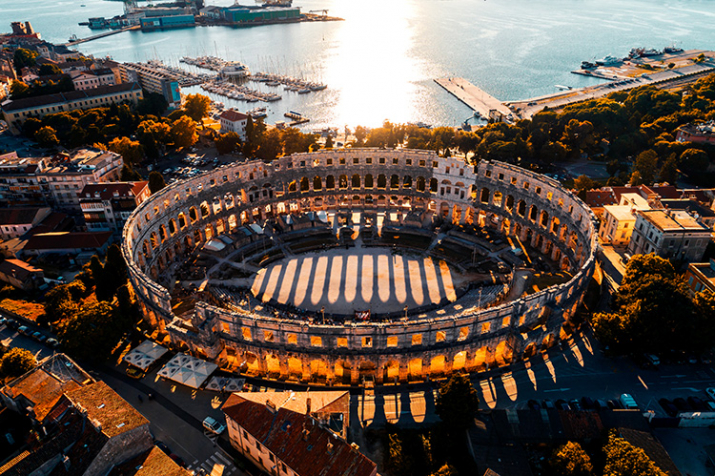 Built in the first century AD, Pula Arena was constructed during the reign of the Emperor Vespasian, who was also responsible for founding the Colosseum.

Able to accommodate approximately 20,000 spectators, Pula Arena would have played host to gladiatorial battles under the Romans and the tournaments of knights in medieval times. Now restored with a capacity of 5,000 people, Pula Arena’s shows are far more docile in nature and are mostly operas and film festivals.

Just a ten minute boat ride from Dubrovnik in Croatia is the beautiful Lokrum Island, home to stunning wildlife – its main inhabitants are peacocks and rabbits – a French fort and a Benedictine Monastery and Abbey.

Lokrum Island has a rich history and is believed to have been inhabited since prehistoric times. Legend has it that Richard the Lionheart was shipwrecked here in 1192 while returning from the Crusades and vowed to build a church there in the event that he was saved. In the end the church was built in Dubrovnik.

The first mention of Lokrum's monastery is in 1023, although some records place the monks there from as early as 915AD. The Lokrum Monastery owned the entire island at one point, while its abbey served as a hospital and almshouse up until the mid-15th century.

Visitors to Lokrum Monastery Complex today can see the remains of its 12/13th century basilica and its 15/16th century monastery and cloister garden as well as the 19th century summer residence and gardens of Maximilian of Habsburg.

Designed and mostly built during the 1460s by Michelozzo di Bartololmeo, an Italian architect considered to be one of the great Renaissance pioneers, Bokar Fortress is one of the world’s finest examples of ‘harmonious and functional fortification architecture’ and was built to defend the western entrance to the city of Dubrovnik. In fact it was the key defender of the strategically vital Pile Gate.

The fort you see today was finally completed in 1570 after a century of debate to decide whether it should actually be finished!

Often called ‘Zvjezdan’, a Serbo-Croat word meaning ‘starry’, presumably for the amazing views of the light pollution-free night sky as you look out into the Adriatic Sea, parts of the magnificent, almost perfectly cylindrical fort are perched on a detached rock allowing the sea water to pass beneath it – which can still be seen today.

It is said that Bokar Fortress is the oldest casemented fortress – that is a fortified structure from where guns are fired – in Europe.

The fairytale-esque Bokar Fortress featured in seasons two and three of Game of Thrones and is perhaps best seen when Varys informs Tyrion he’s ‘quite good’ at being the hand of the king.

Today, the fort is open all year round and is perhaps most famous as a venue for performances of the Dubrovnik Summer Festival.

The isolated wall system on the Peljesac Peninsula connects Ston with the neighbouring town of Mali (‘little’) Ston. The walls were built in the 14th and 15th centuries with two distinct purposes in mind – firstly to act as the first line of defence for Ston as well as the strategically vital port city of Dubrovnik 60km south down the Dalmatian coast and secondly, to safeguard the highly lucrative salt pans in the area which are still operational to this day. The salt produced in Ston is said to be the purest in the entire Mediterranean region.

The limestone walls are shaped like an irregular pentagon and today measure a little over five kilometres in length. They were originally built with 40 towers and five fortresses although only 20 of the towers survive today. Within the walls, streets are laid out in a perpendicular design.

After almost 50 years of restoration projects (for authenticity, using the same or similar techniques as the original builders used), the walls reopened in 2009. They attract a growing number of tourists, partly to see some of the best defensive walls and fortresses in Europe and partly for arguably the most stunning views of the Adriatic Sea you’ll find along the Dalmatian coast.

There is very little in terms of amenities on site aside from a number of hillside restaurants serving what are claimed to be some of the best oysters in the world, eaten literally metres from where they are farmed. The town of Ston includes hotels, apartments, shops and cafés as well as great beaches, watersports and opportunities for excursions further afield.

Fans of Game of Thrones may recognise the Walls of Ston as the fortifications protecting King’s Landing.

The Stari Grad Plain is a prime example of ancient Greek agricultural practices and organisation dating back to the Greek colony of Pharos.

Inhabited by Ionian Greeks in the 4th century BC, the Stari Grad Plain became an important farming landscape, where mainly grapes and olives were grown. Remarkably, the land has continued to serve these purposes for centuries and still does so today.

In 2008, the Stari Grad Plain was added to UNESCO’s list of World Heritage sites. Amongst the reasons for its inclusion was the excellent state of preservation of its “chora”, geometrical shaped plots each enclosed by stone walls. These agricultural practices – ways of splitting or organising the land – were an important method used by the ancient Greeks to parcel up land in the course of farming.

Other aspects of the Greek town are also visible including the ruins of fortifications and some houses.

It is worth noting that, under the Romans in around the 2nd century BC, the port of Pharia became an important military base.

The St John Fort (Sveti Ivan) in Dubrovnik is one of this city’s impressive medieval defences, with towers dating back to the fourteenth century and its main structure to the sixteenth century.

Zadar Roman Forum was built between the 1st century BC and the 3rd century AD and would have been the centre of everyday life in Roman Zadar. An excellent example of its kind, the Zadar Roman Forum is still home to several monuments as well as being found at in front of the famous St Donatus Church.

Built in the early 1460s at the height of the Turkish threat, the Minceta Tower is a huge round fort dominating the north-western section of the city and became the symbol of ‘the unconquerable city of Dubrovnik.’

The Minceta Tower is as recognisable an icon of Dubrovnik as the Eiffel Tower is of Paris. Fans of Game of Thrones may recognise the Minceta Tower as being the House of Undying in Qarth, where Daenerys Targaryen searches, ultimately successfully, for her stolen dragons,

It was originally constructed as a four-sided fort in 1319 and its name is taken from that of the landowners of the time, the Menčetić family. Immediately after the fall of Constantinople to the Turkish Ottoman Empire in 1453, the tower was added to by Italian sculptor and architect Michelozzo di Bartolomeo Michelozzi who built a round tower adapted for warfare with 6m thick walls and protected gun ports.

A disagreement ensued between Michelozzi and local government officials which prompted his return to Italy but the tower was completed by Giorgio da Sebenico, otherwise known as Juraj Dalmatinac who added stability to the bottom of the tower as well as its iconic Gothic crown.

The tower was completed in 1464 and even though the 750 steep, winding steps to the top are a challenge for even the fittest cultural tourist, when you get to the top and see the sensational views of the old town of Dubrovnik to one side and out into the Adriatic Sea to the other, you’ll understand that the climb was worth it. You can also visit the museum in the excavated basement.

Fort Lovrijenac is a stunning and imposing cliff-top fort located just outside Dubrovnik’s medieval city walls. One of Dubrovnik’s most impressive structures, it guards the western entrance to the city from the Adriatic Sea.

Legend has it that Fort Lovrijenac was built on a 37m high cliff in in merely three months in the eleventh century by the people of the Republic of Dubrovnik to head off an imminent attack from the Venetians. At the time, the Venetians were intent on building their own fort in this location, but Dubrovnik’s citizens completed Fort Lovrijenac first, thus frustrating the Venetian plans for military superiority.

On the three sides an enemy could attack – north, west and south-west – the walls are up to 12m thick but on the city side they are no more than 60cm thick. There was some logic to this whereby if a fort commander attempted a coup d’état, the Republic’s artillery could quickly and easily penetrate the fort and take back control.

The fort has a quadrilateral court with high arches and three terraces with parapets overlooking the sea. It was defended by ten large cannons including the beautifully carved ‘Gušter’ (‘Lizard’) made by Ivan Rabljanin. Above the door leading into the fort is the famous inscription ‘Non Bene Pro Toto Libertas Venditur Auro’ – ‘freedom is not to be sold for all the gold in the world.’

Game of Thrones fans will recognise Lovrijenac Fortress as the Red Keep in King’s Landing, the capital of the Seven Kingdoms. Scenes filmed here include the tournament thrown in honour of King Joffrey’s name day in the second series.

Today, the parapets once used to defend the city have been transformed into some of the most dignified theatrical stages in Europe, famous for performances of Shakespeare’s ‘Hamlet’.